Patience is dead - so why does your UI demand it? 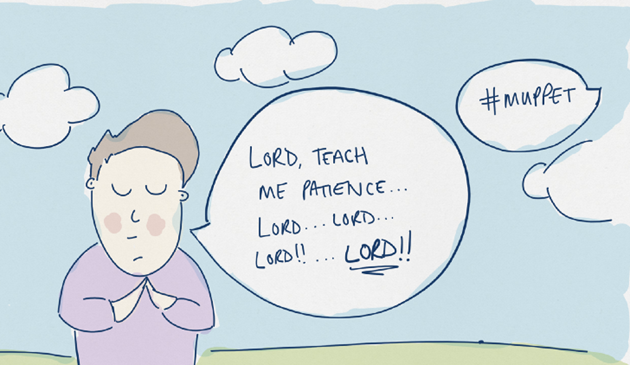 Hearing an old fax machine wail through the simple task of receiving a letter whisked me back to my teenage years. It reminded me of a time, not too long ago, where I would sit, sometimes minutes at a time, listening to the orchestra of kilobytes as my parents' computer connected to the World Wide Web. A procession of events, the horrific wailing, the wait, the click… click… wait… click… wait… Of course, for those old enough, you will know that I am talking about the wonders of dial up.

I was immediately lost in a plethora of memories from the 50-foot cable we routed through my parents' house to achieve internet in multiple rooms, to the excitement a new message on MSN delivered and the fact that, for the first couple of years of my relationship with my now wife, Jo and I spent hours chatting and putting in the groundwork to what is now a 13-year relationship - blimey.

Of course, being a raging extrovert, I couldn't keep it to myself. I dove into reminiscent conversations with the colleagues unfortunate enough to be in close proximity to me at the time. The very nature of it all seemed comedic, ridiculous, unfathomable even. Imagine a 15 year old now spending all that time waiting for a page to load or investing effort into tackling those indecipherable user interfaces. Now, page loads are microseconds or bust, gracefully loading from top to bottom, across a multitude of devices and optimised for each. We are spoilt with a magic field called Google and can download an album in 15 seconds or less.

However, this isn't just sentiment, in 2006, Jupiter Research published a study suggesting that online shoppers are likely to abandon a website if it hasn't loaded within 4 seconds - what became known as the 4 second rule. Whilst, in 2012 a study by Steve Lohr implied that this has been further perpetuated and that a delay of even 400ms will affect a user's behaviour. Furthermore, applying that to a video streaming context, a study by Ramesh K. Sitaraman, of the University of Massachusetts, on the viewing behaviours of people streaming content showed that after only 2 seconds delay, the probability of abandonment on videos increases steeply, exceeding almost 60% before 10 seconds is reached.

This is obviously nothing new, one of the phrases that is so often used to encapsulate a great idea - 'the best thing since sliced bread' is based entirely around convenience and immediacy. When did slicing bread become such a chore?

When thinking through all the things we have come to take for granted and the ever growing distance we put between ourselves and the memory of patient consumers, you can't help but think, what questions will the consumer ask next?

The last point, on the face of it appearing to be the most outlandish of them all, has already been put into motion. In 2014 Amazon announced that they had obtained a patent for what it called "anticipatory shipping". The Wall Street Journal reported: "Amazon says it may box and ship products it expects customers in a specific area will want - based on previous orders and other factors… According to the patent, the packages could wait at the shippers' hubs or on trucks until an order arrives".

So what is the next why?

In all likeliness, all of the above. User interface will surely become wasteful and an inconvenience rather than an enabler, content is and will be delivered in bitesize chunks and everything will be hyper contextualised.

Artificial intelligence will of course be a huge part of the next 5, 10 or 15 years but what's the answer to the next why?

My money is on Chatbots. Bear with me now - this isn't me playing buzzword bingo. Initially I was sceptical about chatbots but on closer inspection, and after speaking to my most learned colleagues - Jonathan Seal and Gary Pretty (Microsoft Bot Framework MVP), it dawned on me that chatbots, or conversational user interfaces, are the next step towards impatient utopia. However well designed and however intuitive, your web experiences, in all likelihood demand that users find what they need within an unnatural context - the more complex and large the information, the more Sherlock Holmes-like they need to be.

Chatbots however, do the learning for you, they understand your frame of reference, provide you with hyper contextualised information, remove all the effort and will do all of this within whatever interface suits you best, WhatsApp, Slack, IM, SMS, voice…

Surely they are the perfect response to the ever growing demand for immediacy?

I believe chatbots and conversational user interfaces will either usher in a new age of heightened immediacy within digital consumption or become a key component in responding to it - either way, by me or someone else, your ears should be pricked. Although appearing to be just another buzzword in the buzzword mire that is the digital industry, ignoring chatbots would be foolish.

If you would like to know more, please get in touch. I would love to chat. Drop me an email to jon.holcombe@mando.agency. Alternatively connect with me on LinkedIn or follow me on Twitter if you'd like to keep in touch.